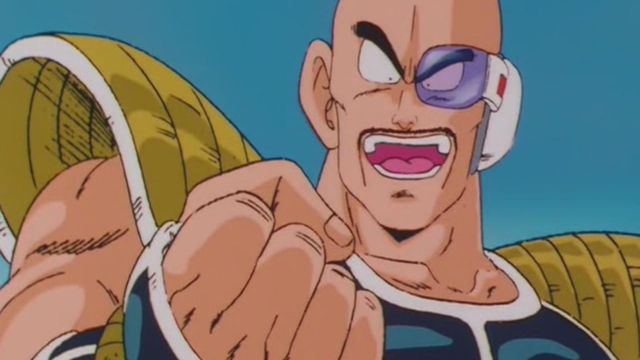 What does the scouter say about their power levels?

The roster for Dragon Ball FighterZ will include two surprising, old-school villains, according to translated scans of the new issue of V Jump magazine. Ginyu and Nappa join the roster, bringing to mind some classic goofs from the cartoon series.

Nappa is perhaps the brawniest and baldest Saiyan in the Dragon Ball cast. His struggles with hair loss, and role as the much tinier Vegeta’s eternal sidekick, make him pretty unforgettable. (Also, the fact that Nappa was strong enough to kill thousands of civilians and almost blow up an entire city shouldn’t be ignored.) Except, well, Nappa actually was forgotten fairly quickly, dying at the end of Dragon Ball Z’s first story arc.

He did live long enough to play an important role in one of the show’s most beloved moments, though:

Later on, fans fell for him thanks to Dragon Ball Z: The Abridged Series, where he was often referred to as “Vegeta’s dumbass friend.”

If this pose isn’t in the game, we cry foul.

Also revealed in this week’s V Jump, according to Gematsu: Not only will we get to throw down with these guys and the rest of the cast, but the game’s story mode will give players the chance to actually build up relationships with them. Think of this as akin to social links from the Persona series, where the deeper the bond with a character, the more they’re willing to reveal to you. We’ll get access to fighters’ inner thoughts through this part of the campaign, which sounds exactly like the feature we never knew we needed for a Dragon Ball game.

View all posts by: Luffy-san